Negotiations have resumed in the B.C. teachers’ dispute today, raising hopes half a million students will return to the classroom sometime in the near future.​

Officials have confirmed that mediator Vince Ready and bargaining teams from the B.C. Teachers’ Federation and the B.C. Public School Employers’ Association are back at the Richmond hotel where talks took place over the weekend.

The teachers’ union is reportedly tabling a new proposal following a marathon round of negotiations over the weekend.

Because of a media blackout, no one is saying what is being discussed or what concessions are being made.

The talks are raising hopes for a solution in the bitter three-month-old contract dispute, but if they collapse without a deal, a resolution might only come through legislation.

Previously the government has ruled out using binding arbitration to settle the dispute, but has promised schools will be open once the legislature resumes sitting in early October.

The current round of negotiations began Saturday when the two sides met over the weekend at a Richmond hotel—including a 16-hour session on Sunday.

Sunday’s talks adjourned at 2 a.m. PT Monday, when the mediator Ready emerged to say he was able for the first time to bring the two sides together in the same room.

“We had one joint meeting today, and that was the only one we had. Other than that, I’m just shuttling back and forth,” said Ready.

But Ready did say the teachers union would be preparing a presentation for Monday morning.

“The BCTF are working on a proposal, and they are going to get back to me in the morning.” 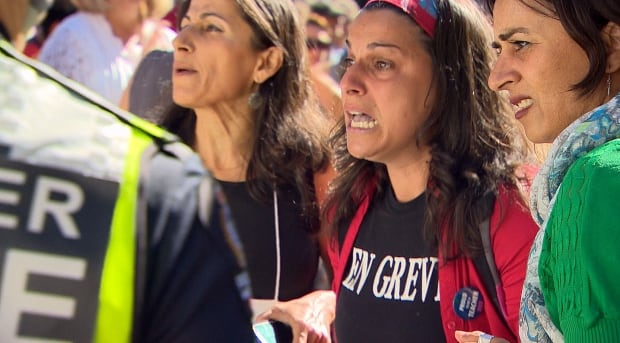 Teachers react with anger as an anti-union group of parents from Richmond, B.C., crash a largely pro-union rally at the Vancouver Art Gallery that included teachers, parents and union leaders. (CBC)

The weekend negotiations followed the government’s rejection of the union’s push to use binding arbitration to end the impasse, despite the vast majority of teachers voting in favour of it.

In the past, the government has accused the BCTF of demanding a wage and benefit package worth twice as much as the contracts agreed to by most of the public sector unions.

And BCTF has demanded the government remove a proposal it feared would circumvent its decade long legal battle to regain some control over class size and composition.

Over the weekend, parents and students made plenty of noise at multiple rallies.

Tensions appear to be rising though. A brief confrontation broke out at the Vancouver Art Gallery when a pro-teacher rally was crashed by a group of parents from Richmond wielding anti-union signs.